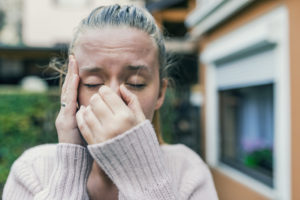 The term allergic rhinitis is often bounced around with hay fever, but are these terms one and the same? Let’s find out.

What Is Allergic Rhinitis?

First, let’s cover what exactly allergic rhinitis is. Allergic rhinitis is defined as an allergic reaction affect the nose caused by any type of allergen. This leads to inflammation of the nasal passages and sinuses.  Allergic conjunctivitis is the same process affecting the eyes.  Allergens are substances that cause a physical reaction in the immune system, leading to symptoms such as:

Allergic rhinitis is the medical condition broadly associated with “hay fever.” Hay fever is a common term used to describe allergic rhinitis because it tends to strike at hay season, when farmers harvest hay. This season lasts from late spring to late summer or early fall.

If you suffer from allergic rhinitis, whether it be “hay fever” or perennial allergic rhinitis, you can find relief with treatment. The first step in treatment is an examination, in which your doctor will conduct a physical exam and allergy testing to determine the allergens causing your symptoms. Once the allergy triggers have been determined, you can receive treatment in the form of nasal medications, decongestants, antihistamines, other medications, and lifestyle changes. Immunotherapy, or “allergy shots” or sublingual treatments, can also be used for allergic rhinitis treatment if it’s the right option for you.

At Allergy Tampa, our highly experienced physicians and healthcare professionals can help you achieve relief from allergy symptoms. Contact us today to schedule an appointment.