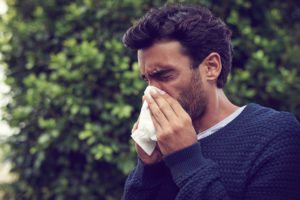 Many people do not think about tree pollen or allergies until early spring.however, with oak pollen begins to be a problem in Tampa as early as December, and the season lasts until May. You may already be getting some symptoms of allergic rhinitis, allergy symptoms affecting the nose, as pollen counts in the area are increasing. Now is the time to get diagnosed and treated for allergies before they become a major issue.

This month,  in January, you might think that you have a mild winter cold. However, a cold and allergic rhinitis share some symptoms. If your symptoms last more than 10 days, you should see an allergist to determine if you have allergies to oak or other pollens. Some of the symptoms of allergic rhinitis include:

As you can see, many of these symptoms are shared with the common cold. If you have symptoms that last 10 days or longer, it may be an allergy.

Allergic rhinitis caused by tree pollen is very common in Florida, and there are several different treatments that are available. When you have an allergy, the body produces histamine and other chemical mediators that cause symptoms. Antihistamines and intranasal steroid sprays are frequently prescribed to keep symptoms at a minimum.

There are also other treatments for allergic rhinitis due to tree pollen. These treatments include subcutaneous immunotherapy or “allergy shots”, which can help your body build up an immunity to oak pollen so that it causes less symptoms over time. This treatment can be highly effective in decreasing or eliminating symptoms of allergic rhinitis.

If you have symptoms of allergic rhinitis, or if you have already been diagnosed with an allergy to oak or other pollens, contact us today to learn about potential treatments.